In 2019 a Procurement of Ground Investigation Steering Group survey was carried out. The survey was a collaboration between the Association of Geotechnical and Geo-environmental Specialists (AGS), British Drilling Association (BDA) and Federation of Piling Specialists (FPS). It built upon the AGS/BDA 2017 survey ‘Spotlight on the industry’ which identified that poor procurement of ground investigation was amongst the top three concerns of the responders.

The purpose of the survey was to identify the level of understanding of, and detail the concerns with, the current procurement processes for UK ground investigation services. The results have been extensively used over the last two years to drive improvements through the procurement process and forms the basis of many decisions for the direction this action has taken, including the third revision of the UK Specification for ground investigation (The Yellow Book) due to be published mid 2022.

Twenty one (21) questions were posed dealing with type of organisation, experience, size of projects and going onto familiarisation with contract mechanisms and documentation and concluding with questions on the way forward and improvements that could be made in the procurement process.

Questions 1 to 10 looked at the details of the respondents in terms of affiliation, experience and qualifications, location and size and also their role in the procurement process.

Responses were received from 175 individuals as indicated in the graphic below. Those affiliations not identified (18%) include BGS, Geological Society, GSHP Association, EIC, DPI, FAME, ICE, RCE Association and the ACE. This is clearly a small but active proportion of the ground investigation community. 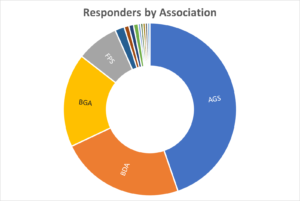 Over 80% of respondents had more than 11 years’ experience and were at least at senior engineer level. Advisors/consultants and specialist ground investigation contractors provided nearly 85% of the responses with over 90% degree qualified or of chartered status.

A fairly even distribution of ground investigation organisations across the United Kingdom was indicated. Companies appear to work across the UK with about 50% considering themselves to be national contractors though with fewer in Northern Ireland. Some 20% of respondents considered they were engaged in global activity.

It is not clear from the responses what proportion of the respondents were geotechnical designers with a knowledge of the proposed construction for which the ground investigation was being proposed. However, some 40% of responses were from ‘Specifiers’ and a further almost 40% from ‘Estimators’ and ‘Procurer/Buyers’.

The latter part of the survey dealt with questions around how the procurement process should be improved going forward.

Q19 presented a series of statements relating to GI Procurement and respondents were asked to rank these according to importance.

The results showed that the vast majority of participants considered that good formal Specifications with the objectives of the investigation outlined and the provision of a Bills of Quantity was necessary. There was a strong view that the tenderer’s estimator should always assess the risks and make allowances for them in the tender return.

A more detailed analysis of the two main respondent groups i.e., Advisor/consultants and Specialist ground investigation contractors reveals that there is general agreement in the responses to these questions. The low return rate from other groups (10 or less responses per group) means that it is not possible to draw any meaningful conclusions for them.

The biggest disparity in opinion between the two main groups is regarding the statements that the contract is always awarded to the most capable rather than lowest cost. Also, the statement that the Designer should always specify the methodologies required appears to be more heavily divided in terms of opinions of the two parties. 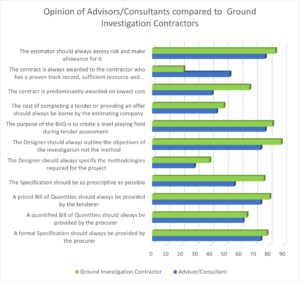 At Question 20 respondents were asked ‘in thinking about the future of the ground investigation industry what changes from a list of 10 factors provided could most improve the procurement process’.

The results of the responses are summarised below in terms of assessed importance. 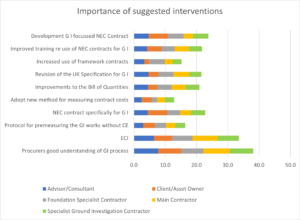 By far the greatest factor identified was that procurers should have a good understanding of ground investigation process and there was considerable support expressed for Early Contractor involvement. Conversely the increased use of framework contracts, adopting new methods for measuring contract costs and establishing a protocol for pre-measuring The GI works without resorting to Compensation Events was seen as having the least potential impact in improving the procurement process.

Again, a more detailed analysis of the two main respondent groups i.e., Advisor/consultants and Ground investigation contractors reveals that there is general agreement in the responses to these questions.

The most important issues identified regarding improvements centred around the following themes:

As noted above a more detailed article is due to appear on the AGS website shortly which will deal with the responses received question by question.