The SiLC Affiliant Scheme is due to be launched later this year to assist graduates and those who have already progressed beyond graduation to work towards SiLC Registration. A challenge for all professional bodies is to support individuals with the potential to become full members and bring them in at entry level membership. It is proposed that the SiLC Affiliate Scheme will create a potential pipeline of graduates and more experienced individuals working towards full membership and Chartered Status with their professional institutions, the latter being a pre-requisite for SiLC Registration.
Access to advice and mentoring for career progression through the SiLC Affiliate Scheme would :
• Encourage each individual to pursue professional qualifications and memberships;
• Encourage people to recognise the brownfield sector as a career path;
• Give mentored access to the Brownfield Skills Development Framework;
• Help Institutions build membership;
• Funnel graduates into Institutions and towards SiLC Registration in the longer term;
• Create greater momentum and growth in the SiLC Register and underpin the SiLC Register in the long term.
The proposal is set out below which shows the three tiers leading to SiLC Registration together with the connection between the SiLC Affiliate Scheme and the Brownfield Skills Development Framework and the level of support which can be offered at each tier. An applicant can join the scheme at any stage. 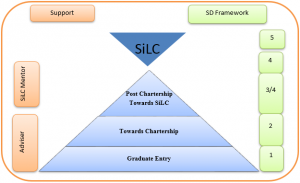 The roles of the Adviser and Mentor are considered to be distinct and undertaken by a different group at each stage. The roles are presented below along with an indication of the range of support to be offered.

An announcement will be made by SiLC when the lists of Advisers and Mentors are complete and everything is ready for the scheme to be launched.

For further information on SiLC visit https://www.silc.org.uk/ or find SiLC on LinkedIn.

This article was featured in the July/August 2018 issue of the AGS Magazine which can be viewed here.