Over the last 15 years, we have seen numbers enrolling for geoscience degrees steadily falling and this has prompted many of us to do some serious soul-searching to work out why this might be. In doing so, what has become apparent to me is that Geoscience, as we have all known it, is perhaps no longer relevant to today’s demands for sustainability, or reaching the wide student audiences that other science degrees continue attracting. Numbers have fallen by 43% since 2005 and mirror a similar demise in students taking A-Level Geology, which tends to track the oil price (Figure 1). Looking at the longer term, A-level Geology student numbers peaked in 1983-84, coinciding with the North Sea oil boom, and since then there has been a steady decline of 66% in total numbers.

The climate emergency and shift away from carbon based energy will require Geoscience at Universities to examine and perhaps loosen its ties with the oil sector, to focus more on climate change, the energy transition, and urban geoscience, while embracing artificial intelligence and the big data challenges to make our degrees more relevant to Generation Z. In conjunction with these falling student numbers is the realisation that geoscience, in a University setting, is dominated by white middle-class males with black and Asian minorities poorly represented as students and academics, as well as those from poorer socio-economic backgrounds.

This article will focus on how we should make our degrees, and as a consequence industry, more fit for purpose sustainability-wise, inclusive and diverse academically, and potentially broaden the understanding of Geoscience to young people who are currently unaware it exists as a subject or that it provides viable career opportunities. I use the term Geoscience as a catch-all to include subjects at University and in the profession that encompass geology, earth science, hydrogeology, geophysics, engineering geology, and geohazards etc. 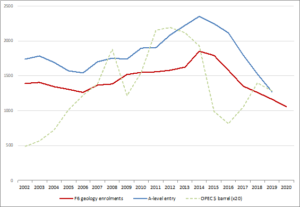 During the Webinar on the 30th July 2020, I asked the question: “Does anyone actually care, apart from geoscience departments at Universities, about this demise?” Until the lack of UK geoscience graduates actually starts to negatively impact UK PLC in terms of its ability to function, then unfortunately, I doubt that industry or government will be concerned. According to a survey taken after the Webinar, 83% (28 out of 34) of respondents stated that they did not currently have difficulty in recruiting geoscientists. So it would appear that this is presently a problem for geoscience departments in Universities but not necessarily industry. But what about over the next 30 years? If numbers continue falling then will this decline adversely affect UK PLC in achieving some of the grand challenges of our time? Such as: carbon neutrality by 2050; the energy transition; and resilience to climate change, all of which are problems that require significant geoscience expertise and leadership. Interestingly, 76% (26 out of 34) of AGS members who gave feedback studied for a geoscience first Degree, which suggests that if geoscience student numbers continue to fall radically then this will negatively affect the ability of AGS members to recruit graduating UK geoscientists.

There is much research around access to the STEM subjects (Geoscience is STEM). I will briefly discuss some longitudinal research that investigated the science aspirations of young people. The ASPIRES project started at Kings College in 2009 and continues now at University College London as ASPIRES 2 (Archer, Moote, Macleod, Francis & DeWitt. 2020). Looking at some of those important outcomes from the ASPIRES 2 project: only 16% of 10-18 year olds aspire to be a scientist, and within that age band aspirations remain unchanged. Yet, we know there is considerable interest in science and that 10-18 year olds appreciate and understand the importance of science. So why is it that only 16% of 10 to 18 year olds want to be a scientist? The research tells us that science is perceived as a subject only for “brainy high achieving students” and this attitude is exaggerated through to secondary school years. It is the students identifying as white middle-class males, with high levels of what the APSIRES 2 researchers term “science capital”, who are inclined towards science as a career. Science capital is defined as a person’s understanding of science through parents, friends and family, careers and teacher advice at school etc. This reinforces white middle-class dominance in science as this group is more likely to have access to these capital-building experiences than someone from a low income, inner city background. When looking at black students the trend is different. Many aspire to be scientists at a young age but this enthusiasm does not translate beyond 16 years of age. The ASPIRES 2 research tells us that this is due to many factors but primarily structural racism, societal inequalities, and the lack of science capital.

The Black Lives Matter movement has had the effect of accelerating the whole issue of underrepresentation of Black, Asian and Minority Ethnic (BAME) students and academics in Higher Education (HE). This is a really important issue that needs to be addressed by all of us. In the UK, 14% of the population is BAME, this percentage increases to about 18% for 18 to 24 year olds (UK Census 2011). When we consider urban populations, that percentage increases to: 42% in Birmingham, 40% in London, and 33% in Manchester for instance. Dowey, Barclay, Fernando, Giles, Houghton, Jackson, Mills, Newton, Rogers and Williams (Unpublished) report that in 2018/19, BAME enrolment in undergraduate Geoscience was just 10.1% with Physical Geography being the worst of all the 54 Physical Sciences, with 8.5% BAME representation on undergraduate courses. An internal report by Fernando and Antel (2020) for Oxford University’s Department of Earth Sciences asserts that BAME students make up about 5% in Geoscience compared to about 11% in other science departments at Oxford. I would imagine that these percentages are very similar in the UK “ground engineering” sector.  For instance in a survey carried out by Business in the Community, results show that just 3.4% of all construction managers in the UK are from ethnic minorities.

What are the barriers to BAME students with respect to Geoscience? From anecdotal evidence, work undertaken by Oxford University and others, plus the Aspires 2 research, I would argue that: Geoscience is perceived as a white male dominated subject and as such this discipline does not look inclusive; Geoscience is seen as the “dirty polluter” rather than the solution to climate change; BAME students are commonly from inner city communities (as the stats tell us) and have little or no “geoscience capital” as opposed to white middle class students who are more likely to go to a private school and therefore have access to far better careers advice and teachers who are tuned-in to Geoscience etc.; BAME students have little or no exposure to the principles of field work, which they may perceive as expensive and often tied to locations where there are very few BAME people (rural France for instance) which might feel threatening as an experience; Geoscience is seen as being for outdoorsy types with little or no urban context; the subject is considered old fashioned and out of date, focussing on outmoded industries such as oil. These barriers are intersectional in so far as they affect not only BAME students but other underrepresented groups in Geoscience including students that identify as female or transgender, for instance (Fernando and Antel, 2020) .

Our current approach to Geoscience is, in my opinion, far too old fashioned and probably does not appeal to young students from an urban background who: do not have any Geoscience Capital, attend inner city schools with little outside space, have careers teachers who do not fully understand the opportunities that Geoscience can offer, and parents who are not aware of the professions that a degree in Geoscience lead to. I would argue therefore that there needs to be a complete re-think in the way we teach Geoscience. As the ASIPRES 2 researchers say, “we need to change”, not the students, in order to make Geoscience much more attractive and relevant. 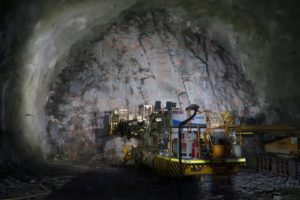 In light of the above it is clear to me that we need to do something different in Geoscience education to increase diversity and at the same time boost the overall numbers of students wanting to take Geoscience as a Degree. Introducing Urban Geoscience into the undergraduate curriculum may be one way of achieving some of the changes that are clearly required. Urban Geoscience is about the understanding and utilisation of the ground beneath our cities. In the UK over 80% of the population live in urban areas (2011 UK census). According to the UN, 55% of the world population currently live in cities and this is projected to increase to 63% by 2050. Therefore, Urban Geoscience has the potential to be relevant to a massive number of young people. I should emphasise that Urban Geoscience is not just another term for Engineering Geology or Geological Engineering (see Abolins, 2002). In my mind it encompasses subjects such as sustainable and resilient cities, sub-surface urban planning and architecture, and future cities to name a few. A Degree could encompass multi-disciplined teaching with architects, engineers and planners to develop an integrated, modern holistic degree which satisfies industry and produces graduates that are equipped with the correct skills in digital visualization, manipulation of big datasets, spatial analysis and programming together with the fundamental knowledge around geoscience, ground characterisation, hydrogeology, the Anthropocene, ground engineering design, and ground-structure interaction.

There is an opportunity here for industry and the HE sector to work together to develop a totally focussed and inclusive new type of degree in Urban Geoscience. It is recognised that some University geoscience departments will not have the expertise or staff to deliver a full degree programme and may require help from others if they want to travel this route. My thoughts are that there could be a movement to develop a Degree Apprenticeship (DA) “Geoscience” Standard which has a number of degree pathway exit points, one of which would be Urban Geoscience. The advantages for the student in doing a DA are many, but one significant benefit is that there is no debt at the end of the degree. As there is no DA in geosciences or related disciplines, the combination of DA plus Urban Geoscience may be attractive to an entirely new set of potential geoscientists who may otherwise not think University is for them or would never consider Geoscience as a degree or career.

My challenge to the geoscience community is therefore as follows:

Fernando, B and Antell, G. (2020). Recommendations for improving racial equality, diversity, and inclusion in the Department of Earth Sciences, University of Oxford Ad hoc working group on BAME issues1 February 2020.